Unfinished Business on the Montreal Protocol

This June, NGOs gathered in Portugal to discuss opportunities for accelerating the hydrofluorocarbon phase-down set forth in the Kigali Amendments.  “Adopt and strengthen” has been the catch phrase of the F-gas campaign since its inception in 2008.  That remains as important as ever.

The Kigali Amendment was an unqualified diplomatic and substantive success.  It placed the entire world on a mandatory phase-down schedule for hydrofluorocarbons, preventing runaway growth in HFCs.

Still, it left key details undefined such as the future baseline against which all progress will be measured.  In addition, major implementation hurdles need to be cleared away and enforcement clauses must be shored up.  But most of all, the timetable needs to be accelerated by providing multiple incentives for leapfrogging to the most sustainable alternatives.

At the June meeting in Portugal,  NGOs proposed multiple approaches to advance work on the Montreal Protocol, a few of which are already being pursued by K-CEP funders. However, they agreed vigilance is crucial to avoid a watering down of the Kigali Amendment through inertia, indifference or malice. Brief descriptions of each intervention are provided in the text box below.  Fuller explanations are available from ClimateWorks Non-CO2 team and the leading NGOs. 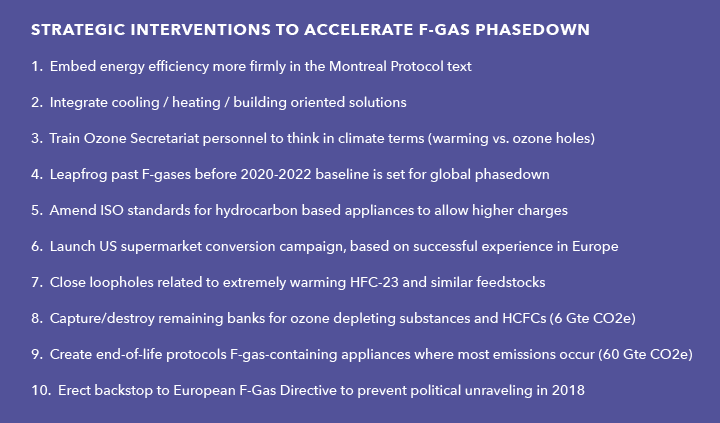 NGOs also discussed troubles brewing in Europe, which is under a 15 year phase-down schedule.  The first major deadline is January 2018 (see figure below) and industry – which was hedging its bets – seems unprepared to comply. Major shortages and price spikes for replacement chemicals (which are already expensive) are expected. NGOs think this likely to promote black markets. They also expect production to be disrupted, perhaps with some marginal companies closing down. Southern Europe is likely to be the hardest hit. The net result could be pain all around: at the industrial, consumer and political level. European NGOs are rushing to get ahead of the crisis and to prevent the fall-out from spreading, but also see this as a moment to take a major leap forward for alternative refrigerants (hydrocarbons, ammonia, nitrogen, etc.) – a complex opportunity involving multiple players and institutions. 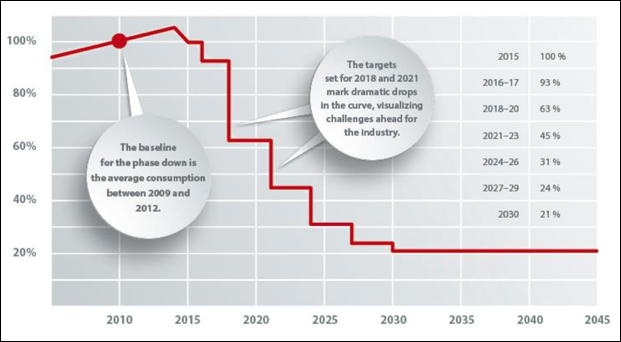 Vigilance comes at a cost. The multiyear NGO campaign leading up to the Kigali Amendment was well supported by philanthropy and governments, with the last minute surge of $80 million helping put the agreement over the top. Ongoing action to ensure the F-gas transition agreed in Kigali actually happens, needs continued NGO engagement and support, as well of course as robust replenishment of the MLF.

In terms of urgency, the European crisis is first and foremost, since it will hit in January 2018. The next most urgent tasks are to open the pathway to sustainable alternatives, close enforcement loopholes, and do everything possible to set a decent 2020-22 baseline. ClimateWorks and the Pisces Foundation are actively seeking partners for these Kigali+ efforts.